In order to watch game three of the World Series, we spent a night in a hotel in Page. Go Sox! Page was established in 1957 to support the thousands of workers and their families during the construction of the massive Glen Canyon Dam, which took over ten years. The dam is over 700 feet tall and 1000 feet wide. The construction of this dam created Lake Powell which provides water and electric power for western states. The lake and the surrounding area are now a significant tourist draw for boating and OHV riding.

Leaving Page for Flagstaff, we journeyed through the Navajo Nation Reservation which spans 27,000 square miles across Arizona, Utah and New Mexico. The population of the reservation is about 350,000. We have never been on a reservation without feeling a measure of sadness. The housing on reservations consists of trailers and ramshackle cabins. The poverty is obvious. What we saw within the Navajo Nation in Arizona was no different. The B+W photos in this post were taken on the reservation. I did not include any photos of tribal housing as it would be disrespectful. You will also see the issue of uranium mining being addressed in the art below. Navajo tribal members have significantly higher rates of cancer and other illnesses from exposure to uranium that was mined within the reservation; slag was left on the surface for years and mines were not sealed. 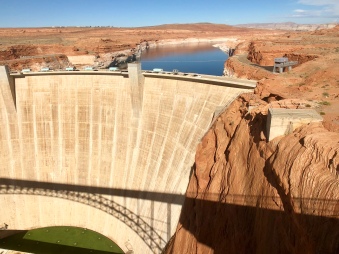