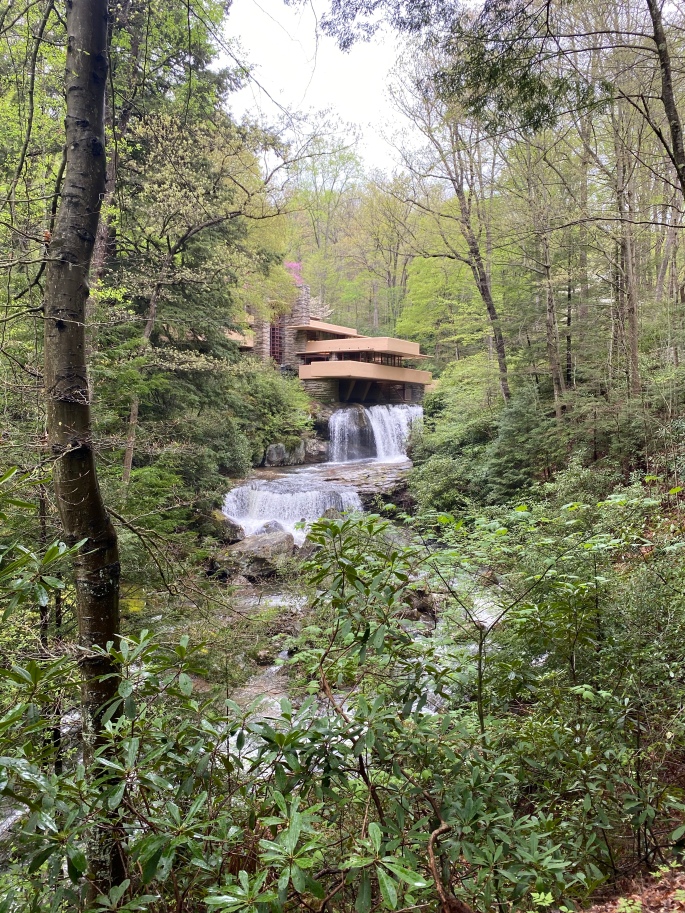 After our visit to Pittsburgh we decided to head south to Ohiopyle, Pennsylvania to visit the Frank Lloyd Wright masterpiece Fallingwater. Fallingwater was designed for the Kaufman family. Edgar and Liliane Kaufman were prominent members of Pittsburgh society and owners of the highly successful Kaufman’s Department Store.

The Kaufmans owned the property at Bear Run in the Laurel Highlands where they had a rustic weekend retreat. The met Frank Lloyd Wright through their son Edgar jr. The younger Edgar studied with Wright for a short time at Taliesin in Wisconsin.

Edgar jr sold the home and 1500 acres of land to the Western Pennsylvania Conservancy with the proviso that the home be open to the public. The conservancy purchased another 3500 acres adjacent to the former Kaufman property to assure that the area remains unspoiled for future generations.

Wright designed the house in 1935 after visiting the site and integrated the house into the waterfall and landscape in brillant fashion. Wright practiced what he called “organic” architecture and Fallingwater is undoubtedly unparalled in that regard.

Wright also designed many innovative and one of a kind pieces of furniture which can be found throughout the main house and the guest house.

Wright designed over 1000 structures in a career that spanned 70 years. Just over half of his designs were constructed. He was a pioneer in many facets of design and was acknowldeged by the American Institute of Architects in 1991 as the greatest American architect of all time.

Wright’s designs were not limited to just his well known private residences. He designed churches, schools, museums, hotels and office buildings. Additionally, he designed one gas station (which we stumbled upon during our previous wanderings in Michigan.)

In addition to achieving phenomenal fame as an architect Wright also achieved significant noteriety in his personal life. During his life he was married and divorced several times in very public fashion and suffered the tragedy of having a lover and her children murdered at his studio while he was away on business. Recommended reading -The Fellowship:The Untold Story of Frank Lloyd Wright and the Taliesin Fellowship.

Fallingwater is located near Ohiopyle, Pennsylavania. Ohiopyle State Park encompasses over 20,000 acres of beautiful scenery for hiking and camping. The Youghiogeheny (yawk) River runs though the middle of the park and provides serious whitewater rafting and kayaking opportunities. Additionally, the Great Allegheny Passage bike trail runs through the park with a trailhead in town for easy access to ride towards the Pittsburgh or Cumberland, Maryland terminus points.

The combination of outdoor activites and Fallingwater makes Ohiopyle a popular destination with many visitors. As we visited early in the season there were no crowds. We definitely recommend the Ohiopyle area as worth a several day visit.

P.S. There is a second Frank Lloyd Wright designed house (Kentuck Knob) close by which is open for tours. Kentuck Knob is an example of Wright’s Usonian (affordable) designs.